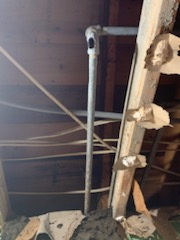 She refused to be sad and jokes that she wanted her kitchen remodeled anyway. I don't want imagine what the outcome would have been had she stayed.
To add insult to injury, some of the electric companies who lured customers in with cheap rates had price spikes to the tune of thousands of percents due to their variable rates attached to those initial cheap rates. This left already suffering Texans with electric bills in the hundreds to the tens of thousands of dollars. One thing I learned a long time ago when learning about acquiring a mortgage, was to stay away from "variable rates." I never trusted them. When selling those plans, the low rates are highly promoted and the possibility of the increase is greatly downplayed. However, a government moratorium was passed on disconnections, so no one will have to worry about getting their electricity disconnected because they can't pay.
This tragedy has so many moving parts, so I'll have more to come. There will be more because as the weather warms up, the hard work of picking up the pieces begins and mourning the losses resumes.
at February 24, 2021 No comments:

When everyone was wanting to quickly usher in 2021 before 2020 was even over, My thought process was not to rush time. You don't know what the rest of 2020 could bring, and you don't know WHAT 2021 will bring as tomorrow isn't even promised!              Well here we are, going on day 3, and my family and I are 'one' of millions, sitting in our home with no electricity in below-freezing temperatures! This is utterly RIDICULOUS in the technologically-advanced 21st Century United States of America. Of course fingers started pointing. I'm from a town a few miles outside of Houston. So we fall into that General Houston Area. Of course some started pointing fingers at Houston's Mayor. Being a black mayor, sometimes he's made to take blame a little more readily. He took tremendous heat for a viral photo someone posted of Houston's skyline showing the contrast of lit skyscrapers and darkness where homes and smaller businesses would be. The truth is that a vast majority of those skyscrapers have their own backup electrical generation as they house critical infrastructure for their various operations such oil & gas pipeline and IT operations. So it's not like the Mayor let the big corporations stay lit while the people's power got turned off. The mayor of one large city isn't responsible for the entire State of Texas' electric grid. The operation of the electrical grid falls under the Electric Reliability Council of Texas, "affectionately" known as ERCOT and, of course, the Governor falls in somewhere as well.
Weather reports have been predicting this weather system for at least 2 WEEKS BEFORE it even made it to Texas! This, to me, makes this that much more despicable to me. I'm hearing reports of how the grid wasn't prepared for such extreme conditions. However it does freeze in Texas. This may have been one of the most extreme, but there ARE freeze conditions in the winter, so I'm not excusing such a lax in preparing for this.
Some are blaming the green energy methods such as solar and wind farms as many of the turbines are reported to have frozen. Some were blaming natural gas liquid facilities. Nevertheless at least 2 weeks of predictions, I feel, could have bought some time for better preparations than what seems to have occurred. People "smarter than me" couldn't better prepare or did they erroneously believe they didn't need a higher level of preparation???? I believe the latter, and here we are.
Here we are, freezing in our own homes. People have died of carbon monoxide poisoning out of sheer desperation to stay warm using improper methods. The City of Galveston, a neighboring beach town, has reported about 5 people dying. I had erroneously reported 20. My apologies. They had actually requested a refrigerator trucks that could HOLD 20 people in anticipation of that many fatalities. Thankfully, there weren't 20, but the FIVE reported was far too many. This is unconscionable. ERCOT and the State needs to answer for this in their comfortably warm accommodations. I'm thankful we have enough blankets, food and a gas range that can be lit without electricity. My heart and condolences goes out to the loved ones of those who senselessly lost their lives here. Needless to say, I'll be glad when the lights are back on.
at February 17, 2021 No comments:

I know that I needed to be out here, but I was so consumed with putting my ducks in a row for an important project that's been on the horizon for me. I've been taking small, hesitant steps, but lately, I've been getting more and more incentives to push forward. And yesterday, as I was finishing up on my day job, I got a "good-bye" e-mail from a co-worker who was leaving the Company for her own business venture. I was so proud of her.

About a year or so before the Pandemic, she and I had been discussing a possible venture. I'd overheard her talking on the phone on our lunchbreak, and I pretty much knew what she was talking about. And it was pretty refreshing to know someone else who was about to embark on the same venture I was interested in. Off and on, we'd touch base about it, but the last time we spoke, she didn't seem to be as into it as before. Next thing you know, the pandemic struck, and with our different work-from-home schedules, we hardly saw each other. And we weren't as close whereas we hung out after work hours. It's something how you can be so familiar with the people you work with, but it stops as soon as you walk out that door to go home...which brings me back to yesterday.

I was finishing up for the day, and I was doing my final e-mail check, when I saw an e-mail from her. Because I hadn't checked them earlier, she was already gone for the day, so I had to congratulate her on her personal e-mail.  I was ecstatic for her.  This gave me an even bigger push to take steps needed to get my own venture started. I had gotten a few things done, but I was stuck on the kind of business checking I wanted to get. I have really bad habit of overanalyzing things. I've been slowed down by what's been coined as "analysis paralysis." It's when you study and read and over analyze something to the point that you just get stuck and don't end up moving forward in your venture.  That happened to me on the venture I had started almost two years. Now it was happening again. I finally prayed, did one more bit of research and concluded with an institution. I started my application process online, but was told that it would take a few days for them to verify my information. However, the nice CSR did tell me that if I went to a local branch, that they take could care of the application the same day.

As soon as I finished my work, I made my way to the local branch, which was pretty close to me. The process was pretty seamless, and my account was approved, and by a major bank! That was big for me, because I'd had some financial challenges that could have hindered my approval, and I had already been turned down by two online banks that supposedly specialized in start-ups like mine. This was also a sign, I believe, for to think bigger than my circumstance and to stop selling myself short. I am very excited! So, with the paperwork that I have filed, and my new account, I was able to be approved to get "work" from this particular platform which I was trying to get on to for quite a while.

I'm moving forward, and it's exciting right now. I know that the road won't always be this way, but I'm so grateful to God for the strength, and the courage to do it afraid: to push through in spite of my fears and doubts. As I push through, these doubts begin to wane, and my confidence is starting to grow.  Now THAT'S moving forward. Now, I've gotta go for now. To be continued...